You are here: Our Community, Our Stories > General > IMPACT delivers life skills for Bundaberg NDIS participants 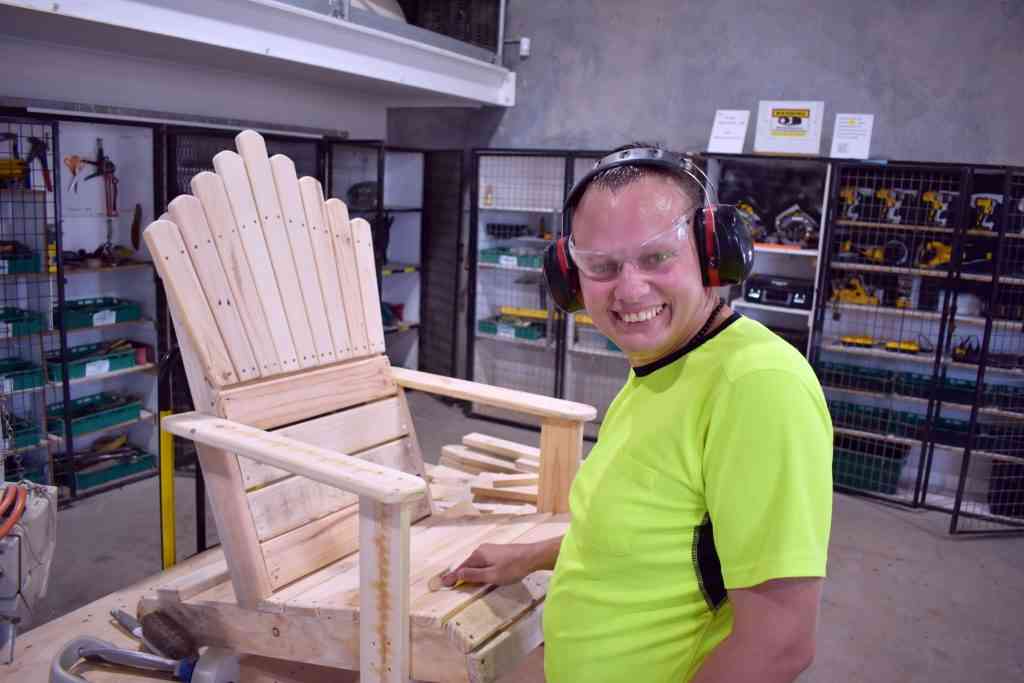 Jaimi Nalder-Dann’s eyes come alive as he picks up the sandpaper and starts working.

As he smoothes the surface on his latest project, a timber seat that you could imagine being used in the next Game of Thrones set, Jaimi’s face is a picture of focus.

Jaimi is one of a dozen or so NDIS participants who join Rob Wallace every week for specialised training in Rob’s Shed.

It’s a time that’s special not just for Jaimi, who has autism, but also Rob who has formed a close connection to those he teaches.

Rob, 63, is an experienced tradesman who oversees all the work that goes on within his shed.

The shed is a special place on the grounds at IMPACT Community Service’s Bargara Rd site.

It’s where Jaimi and others come together to improve their skills in a safe space.

Jaimi loves to dress in his work clothes and get busy. He’s already built for himself an impressive range of works, from tool boxes to items of furniture.  There’s even a letterbox.

Rob said Jaimi was a master with a hammer.

“It’s so good to see Jaimi smiling after he’s finished something,” Rob said, speaking over the background workshop noise as participants worked.

Rob’s passion for his job is plain to see.

He’s big on workplace health and safety and prides himself on the fact there’s not been anyone injured during the three years his shed has been running.

Rob said he worked one-on-one with all participants.

“I’ve always wanted to do this,” Rob said about the role.

“There are a few of the people here who have been with me now for a couple of years.

“They really enjoy the work.  We have quite a few projects going at any one time to make sure people don’t get bored.”

He explained the inclusive process the group went through for new projects.

“We will have a few options and then I put it to the group and everyone gets a vote,” Rob explained.

“It’s all about skilling people and making sure they know how to use the tools safely.”

He said the group dynamic was positive and everyone got on well.

Rob’s Shed is just one of the engaging NDIS programs offered at IMPACT.

If you or someone you know would like to become involved in this exciting program or one of our other initiatives, contact the NDIS team now on 4153 4233 or message them at their NDIS IMPACT Community Services Facebook page.